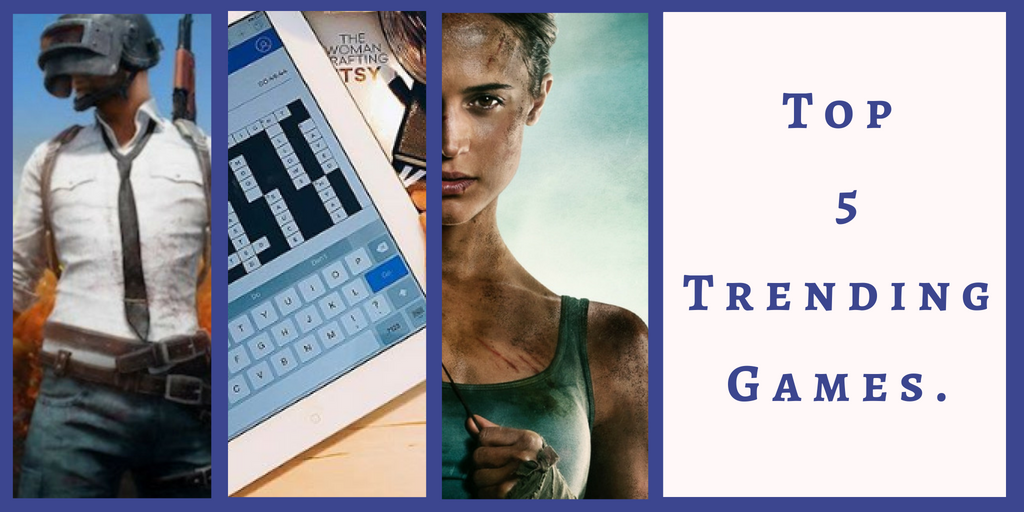 The gaming industry is showing unprecedented growth from the past few years. Every now and then a new game emerges and sweeps us off our feet. Well, even 2018 saw some big gaming hits. These games for sure increased the entertainment quotient in our lives. You might have played a few of them, haven’t you? But do you know what have been the top ten gaming trends this year? No clue? Well, I have it sorted for you.

Here’s a list of the hit games of this year. It includes games from various fields. From sports, puzzle games to action and survival games, I have covered everything. Take a look.

1. PlayerUnknown’s Battlegrounds (PUBG) is the game that has become extremely popular after its launch. The game is an online multiplayer battle royale game. In this trending game, you can use weapons and equipment to kill your enemies on the island, while saving yourselves. But the challenge is, as you proceed to next level, the safe area of the game’s map decreases in size. The last player or team standing wins the round. With over 50+ millions users playing this game, it has become one of the best-selling of all time.

2. Tom Clancy’s Rainbow Six is a trending shooter video game and the first in the Rainbow Six series. The game is all about a tactical shooter. The game has various characters such as terrorists, hostages and Rainbow operatives. While playing this game, you will be given a briefing. You need to choose the operatives in the mission. Select your favorite weapons, equipment, and uniform/camouflage. To successfully complete a mission you require various repetitions and planning. The plot briefs the mission of each scenario. If the character is dead, it cannot be reused to complete the future missions. This online multiplayer game is the best pass time and can be played anytime anywhere!

3. Rise of the Tomb Raider is an adventure video game. It is the sequel to the 2013 video game, Tomb Raider, and the eleventh entry in the Tomb Raider series. The story revolves around Lara Croft as she ventures into Siberia to search the city of Kitezh. While fighting the Trinity, which aims to discover the city’s promise of immortality. While exploring, Lara needs to traverse the environment. She fights the combat enemies with firearms and stealth as she explores semi-open hubs. You can unlock new rewards, complete side missions and can introduce more puzzles and challenge tombs. A sequel of this game Shadow of the tomb raider is all set to release this year in September.

4. Wolfenstein II: The New Colossus is an adventurous first-person shooting video game. The game is on the war veteran William “B.J.” Blazkowicz and his attempts to fight against the Nazi regime in America. When you will play this game, you will experience the different levels. The game has immense popularity and was nominated in the 35th Annual Golden Joystick Awards and The Game Awards 2017.

5. Wealth Words: This is the trending online crossword game that lets you win real cash. The only crossword game where you can make money to solve puzzles correctly. The game has a variety of puzzles and the player needs to solve it in the active time frame of an hour. Once, the player completes the puzzle and submit it, the results are declared after 24 hours. The game not only lets you win cash but also helps in improving your vocabulary and cognitive skills. All you need to do is register at its website, buy tokens and solve its puzzles right. Once you do that you can win real money/cash prizes ranging from $30 to $1010. Now that’s huge.

So what are you waiting for? Start Playing!

Tired of Your Current Job? Play and Make Money with No Investment

Learn how to solve the Wealth Words Crossword Puzzles correctly!

The Past and Future of Crossword Games

The Rise of the Online Gaming Industry

How Gaming Industry Is Taking Over Art

How to Earn Real Money Online with Jumbled...