Play & Win with Wealth Wordoku – A New Version of Sudoku

Hey folks, I am here with a super exciting read for you all. But first, let me ask you a question. How many times have you come across a Sudoku puzzle and played it? For everyone to be on the same page while reading further here is a brief explanation of what Sudoku really is.

Sudoku is a puzzle based on number placement and has many variations. One of them is the classic Sudoku puzzle. Here, players have a 9×9 grid which needs to be filled with digits from 1 to 9 in a fashion that every row, every column, and every 3×3 grid contains all the numbers from 1 to 9.

You got it right? No repetitions in a row, column, or 3×3 grid. Every Sudoku puzzle comes with some numbers already placed at different positions. Depending upon the constraints/hints provided, the difficulty level is set for the puzzle.

I have played Sudoku a lot and there was a time when I was a big fan of the puzzle. It’s an extraordinary brain teaser that helps sharpen your mind. But as they say, change is inevitable. If it would have been Sudoku all around, it would have become monotonous activity.

At present, there are so many Sudoku alternatives out there, which not only guarantee fun but also help you earn money if you solve the puzzles correctly. One of these and a quite promising one is Wealth Wordoku, a Wealth Words game.

It’s time to talk about the Wealth Wordoku game finally! As a new version of Sudoku, I must say the game is quite enthralling and mind-boggling. Wealth Wordoku offers players instant results and instant cashouts.

And, you know what! This is one of the Wealth Words games which has become so popular so fast. Moreover, Wealth Words offer you a real deal here. 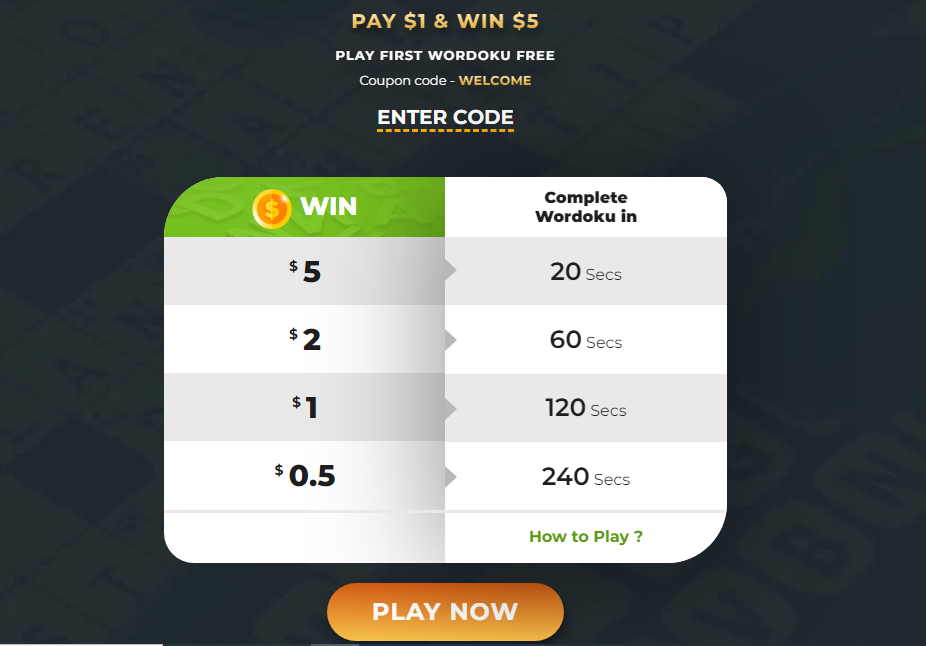 All the new users note this – Sign Up & Play your first Wealth Wordoku absolutely free! Don’t miss this opportunity! Use coupon code: WELCOME

Be a part of the Wealth Wordoku mania… Play here

Maximize your earnings with Wealth Wordoku! 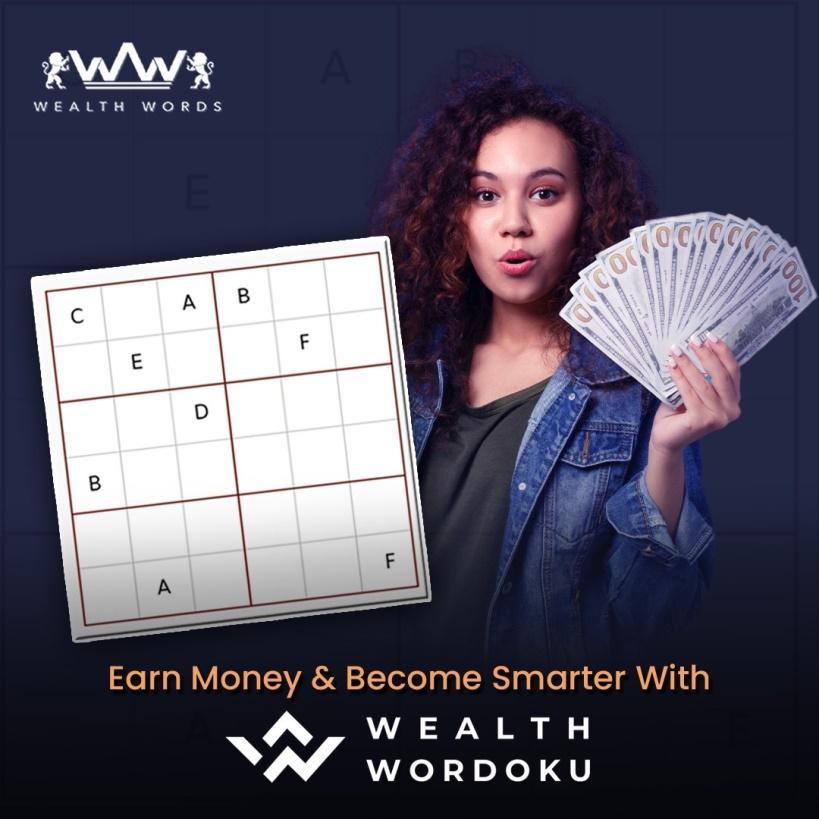 When I tell you that Wealth Wordoku offers real money, what comes to your mind first? How much….? Yes, you’re right. All of us must have played games at some point or the other in our life. I doubt many amongst you could ever believe that gaming can be financially rewarding too.

You have total freedom to maximize your earnings with Wealth Wordoku. You pay only $1 and you have a chance to earn 5x of what you pay, that’s $5, if you finish the game in just 20 seconds. Here’s an opportunity at your doorstep to multiply your earnings in just a matter of seconds.

Wordoku games are not the only Sudoku alternatives out there in the market. In fact, there are many games like Sudoku. We are in the 21st century where things can change anytime, anywhere, and in a matter of just a few seconds.

Wealth Wordoku is a letter placement game! It’s an excellent brain-buster where players can play and cash out their winnings on the go. How do you play Wealth Wordoku? It’s easy.

You get a 6×6 grid, 6 rows, and 6 columns, which must be filled in a manner that there are 6 letters from A-F in each row and each column. That’s not just all! Every 3×3 grid within the 6×6 grid must also have all letters from A-F. No letters to be repeated for any row, column, and 3×3 grid.

Isn’t it exciting? Well, play it for yourself and see how entertaining it is. Wealth Wordoku game is time-bound with a game time of 240 seconds. You need to fill the grid aptly within this time to win and earn real money.

Is that all about Wealth Wordoku? Nope. The game offers players unlimited earning potential to keep them motivated to play the game. What could be better than this?

This is your chance to start earning some real dollars today! Sign Up with Wealth Words and play the game. The more you play Wealth Wordoku, the more you can earn here.

So, what’s the wait for? Sit on your couch, chill out and start playing and earning with Wealth Words games.

Wealth Wordoku’s superiority over Sudoku and other Wordoku games online

Okay, Sudoku fans and all who love puzzles… So now we are talking about something you would be really curious to know. How does Wealth Wordoku win over the traditional Sudoku game?

I have already mentioned earlier here a few advantages of playing Wealth Wordoku. You can earn lots of cash prizes with the online word game.

Wealth Wordoku also gives players access to limitless earnings on the go. Adding on, first-time players can play the game absolutely free with Wealth Words. Hold on! That’s not just about it.

Wealth Wordoku is a real-time game that sharpens your intellect as you find the correct answers. The fact that it’s a mind-boggling brain teaser remains as it really improves the attention span of the players with the twists and turns in the game.

It offers players a gaming environment where they are driven to compete with themselves for the highest scores to improve their earning potential with the game.

Hurray!!! You made it till the end. I hope you are now well-versed with what Wealth Wordoku really is. You understand what makes the Wealth Words game unique as compared to the conventional Sudoku puzzles and other Wordoku games as well.

That’s true you may find many Wordoku games like Sudoku out there, but Wealth Wordoku is one of a kind. I can’t stop bragging more and more about this game because I have seen and felt the magic of it in front of my eyes.

I am sure you will too when you play the game. Don’t take it to be an illusion. Play it yourself and then make your opinion. You won’t regret realizing that Wealth Wordoku is an excellent Sudoku alternative that is lucrative too. It’s a redefined version of Sudoku.

You think how much money, dollars, you want to make out of it and there you go! There is absolutely no stopping.

Amelia Miller is a Blogger at Wealth Words. She has been in the digital marketing industry for the past five years and has helped numerous brands for content & copy writing.

The Social Facet of Online Gaming

How Skill Based Gaming is Different from Gambling

E-Sports are all about following your passion