All You Should Know About World’s Hardest Crossword Puzzle

Being an online crossword puzzle game lover, have you ever tried finding out which the most hardest Crossword Puzzle of all time? No? But do you want to know?

In 2018, Marc Breman, one of the most renowned crossword constructors in Great Britain, released the ‘hardest crossword puzzle in history’.

Marc Breman, 56, creates approximately 13,5000 crossword clues every year for newspapers like the Daily Mirror, the Daily Express, and the Sunday Telegraph.

Started constructing puzzles in 1991, he made approximately 30,000 puzzles in the last thirty years during his crossword career. But, there is only one that stands out from the rest.

‘The World’s Hardest Cryptic Crossword’ got this name because of the intensely abstruse 64 clues. Breman took six weeks to create the clues of the crossword.

The clues like “Fuss about a large bear” or “Yorkshire flower of zero application” may be straightforwardly understood but there are a lot of twists. The Daily Mail newspaper considers it a killer crossword because of its ‘linguistic wordplay, codes and various hidden meanings.

Have you ever tried very challenging big grid puzzles? How long does it take to solve such puzzles?

So, what do you feel how hard would be this Marc Breman cryptic puzzle? Based on the feedback of other crossword constructors or crossword enthusiasts who have tried it, “mine is 100 times harder. Breman told The Mirror, if the description is wrong, then it will take an average crossword solver 100 times longer to solve it. This means it will take approximately two years to solve the complete crossword”. 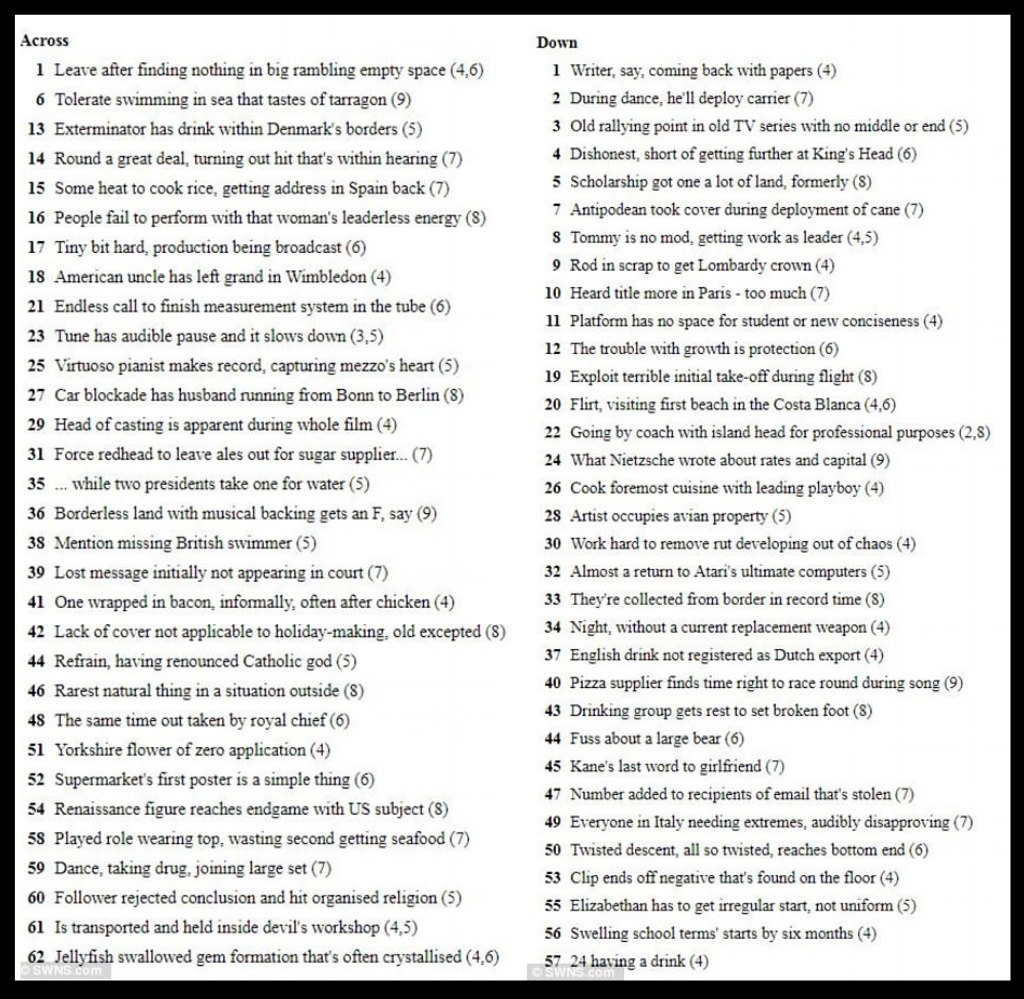 OMG! This is a huge one

Unlike straight crosswords that can be solved if you take the help of thesaurus or internet program, this cryptic crossword can only be completely solved if you have a very good experience and an ability to think creatively.

The amazing crossword constructor Breman was very confident about his challenge. He offered a free copy of the 2017 novel, The Foggiest Notion to top 10 individuals who would send him the solved version of the crossword puzzle with all the correct answers.

He became the victim of his own branding. The puzzle devoured and solved by a person much quicker than he ever expected. In an exclusive interview with The Guardian, Breman said that he started working on the puzzle to make it challenging.

There is always a solution

One reader of The Daily Telegraph, Simon Anthony who lives in London managed to solve the puzzle only under two hours. The brilliant solver said” it was a very enthusiastic puzzle.

Some clues were very tricky but two years was a really long time. The unique crossword had a lot of interesting vocabulary and the clues were outrageous”. Simon was first of the ten individuals who managed to solve the crossword and send the correct solution.

Do you feel you are a good crossword aficionado who solves daily crossword puzzle? How quickly do you think you can solve the puzzle? Give it your best shot and try understanding the clues. And if you need more help, you can watch Simon Anthony’s video where he solves the puzzle clue by clue.

Crossword Puzzles are good for Brain Fitness: Reality or Myth?

Challenge yourself for the most difficult Online Crossword Puzzle

13 Good Reasons Why You Should Make Saving...