Why is Crossword So Popular: How did it All Began?

Why is Crossword So Popular: How did it All Began?

Crossword is the magical game of words where players are provided with clues and the number of letters.

They then have to fill the grid boxes thinking of the right words. Liverpool journalist, Arthur Wynne invented the first crossword puzzle.

This game is believed to be derived from another game called magic squares that was played in ancient Pompeii.

And in that game, the word square consisted of words having an equal length and they could be read either way, horizontally and vertically.

The Evolution of Crossword Puzzles

Born on June 22, 1871, in Liverpool, England, Arthur Wynne migrated to the United States at the age of nineteen. 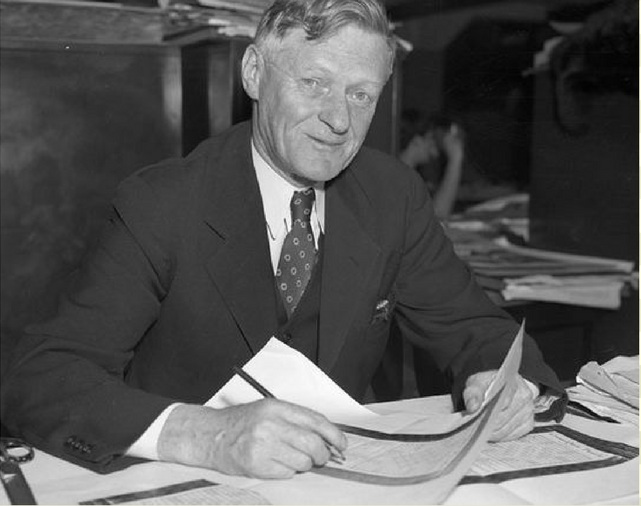 Something more about the Inventor

After some time, he shifted to Cedar Grove, New Jersey, and began to work with New York City-based newspaper-“The New York World”.

The first-ever crossword puzzle he created was published in the same newspaper on Sunday, December 21, 1913.

How did it begin?

In 1913, one fine afternoon, Arthur Wynne was thinking about a new type of game to be featured for the Christmas edition and then he came up with something unique that was adapted from “word squares”.

This game was a challenging one since there were a number of words to work on. The “across” words were different from the “down” words. Initially called “word-cross”, the game was well-received by the audience.

The puzzle Wynee puzzle was very different from today’s crossword as it was in the shape of a diamond having no internal black squares.

As it became a huge hit, the editor asked Wynne to invent a new game weekly for the Sunday entertainment section. 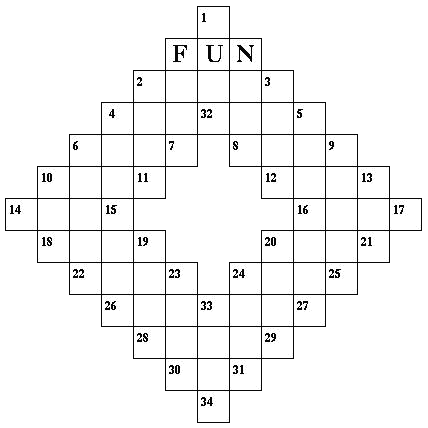 The Zig-Zag Change for the Better

Four weeks after the puzzle was published, typesetters at The New York World newspaper inadvertently transposed the title to read “Cross-word”. For some reason, the name got stuck and so did the puzzle.

After a few months when the editor of the newspaper tried to drop this new name later, readers were so hostile that the newspaper had to stick with the name making puzzle the permanent edition.

Although it was quite popular with the readers, the editors of other newspapers never tried their hands on crosswords.

So, for the next ten years, if you wanted to solve a crossword, you had to buy “The New York World”.

Meanwhile, in England, crosswords took a little longer to catch on. Crossword Tournament states that Pearson Magazine in Feb 1922 was the first to publish and The Manchester Guardian followed it by publishing it on Sunday Express 1925.

Despite gaining so much popularity, “The New York World” was the only newspaper that printed puzzles until 1924 when a fledgling publishing house planned to come out with a collection of the newspaper puzzles in the form of a book. 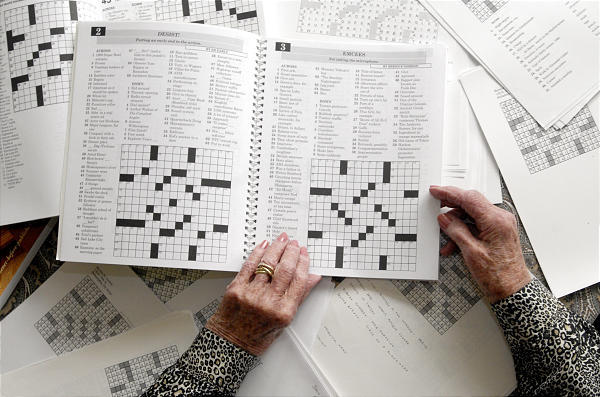 Being a “The New York World” newspaper crossword lover, her aunt inquired where she would find a book of crossword for her daughter.

Simon, who was planning to enter into the publishing world will college friend M.Lincolon Schuster, answered her by saying there are no such books available in the market.

From there came the idea, and both the friends visited the “The New York World” office the very next day to make a deal with the crossword puzzle editors.

The deal got finalized and they were allowed to pick the best crossword puzzles from the newspaper and pay $25 apiece for the rights to publish.

Hot off the Press

Contrary to their belief, it was an overnight success and crossword lovers flocked to the stores to get copies.

By the end of that year, more than 300,000 books were sold out. Tables turned around and they became major publishers. Crossword became a way of life in the 1920s.

All this inspired a Broadway band known as Games of 1925 and the hit song, “Crossword Mama, you puzzle me” came into existence.

The sales of dictionaries soared and libraries experienced huge foot traffic. Black and white check fabric clothes were the rage.

To add more, the B&O Railroad placed dictionaries on its trains for crossword lover commuters.

As per the Guinness Book of World Records, this crossword book helped them to establish publishing giant Simon & Schuster, who still publish the crossword book till today.

Today Simon & Schuster own the largest U.S. publishing house and are the second-largest publishers on earth.

Patented by Variety Games Inc., Crossword Weaver was the first computer game created in 1997 that has crossword puzzles.

The New York Times hired Margaret Farrar away from Simon and Schuster and made her the crossword editor.

She was in this position until she got retired in 1969. The first crossword appeared on February 15.1942 in the Sunday magazine.

Later weekday puzzles were added (September 1950). Under the direction of Margaret Farrar, the crossword constructors turned more innovative and developed an elaborate style.

Instead of giving hints like “stinging insect (bee)” they started phrasing them as “nectar inspectors”.

The Times clever style single-handedly ushered in the crossword renaissance as the newspaper became popular.

Today, more than 90% of newspapers across the globe have crossword puzzles inside them, and 26% of people reading newspapers regularly attempt to solve them.

The New York Times puzzles have set a high-benchmark that is followed by other puzzles.

Today crosswords are one of the most popular and widespread word games in the world as they have developed into a serious adult pastime.

According to the Alzheimer Association, a daily dose of crossword puzzles is a great way to keep the brain active and sharp when you grow older.

In addition, it also promotes collaborative cruciverbalism as it improves the speed of thinking.

If you are lonely, depresses, anxious, bored, go for the online crossword, and divert your mind. You will be hooked in no time.

Over the years, ingenious hands have created more and more techniques for making their players sweat.

Lately, the crossword world has managed to achieve huge fame beyond the confines of its practitioners with the death of Araucaria, The Guardian’s renowned setter.

If you are planning to tackle puzzles, you may try the best online crossword games and get going anytime, anywhere.

Nature abhors a vacuum. When you see the empty black & white grid, you get an urge to fill it.

In general, Monday and Tuesday puzzles are quite straightforward having a particular theme.

Wednesday and Thursday crosswords have wordplay and are a bit tricky. Friday and Saturday puzzles have long answers and Sunday puzzles are the most difficult ones having a challenging vocabulary.

Surprisingly, Monday puzzles are the hardest as compared to other weekday puzzles.

Puzzlers like things that tease and joggle their brain. Puzzles are always fun and you can always find the level of skill you want.

Love it, Play it!

Here are the different types of puzzles that were created over the years:

a) The Power-Packed Blocked Grid Puzzles

The grid-type having words end and the spaces between them are marked by one of the squares being filled in a block form.

b) The real brainteaser Barred Grids

Word endings and different divisions are marked by bars. 12×12 is the standard size but higher letter proportion is cross-checked by the crossing answer.

Smart people know how to solve the smartly packed puzzle. Even while having a smaller grid, the puzzle has 32-35 answers and the vocabulary is more recondite.

This one is theme-based as the clues have added twists related to the answer in wordplay. Theme based crossword is a bit steep but has an exhilarating learning curve.

Here there are no clues to follow, a number replaces alphabets. You have to figure out which letter has what number by deciphering the numbers.

Gridded squares with random letters are word searches. In the bottom or at the side, there are clues that have to be located within the squares. You have to search upwards, downwards, diagonally, or even backward.

Crosswords have completed 104 years, puzzles have become instrumental and alive.

Will Shortz, the editor of The New York Times crossword column has single-handedly made the crosswords interesting with the cultural references and slangs that captivates the audience.

He always keeps on selecting creative interns who help him fresh his column. 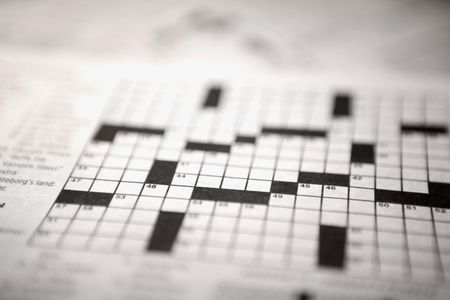 Online crossword puzzles are a buzz among the crossword lovers. There hasn’t been much change in the audience. Cluing has become more democratic but puzzles gravitate that way.

Online games have made crossword more accessible as people can play them on their smartphones anytime, anywhere. The average puzzle solver is a college adult, graduate, or someone in their sixties.

Apps have become the future of crosswords and everyone has realized this eventually. According to a Pew report, tablet usage has crossed over 65% with 27% of senior citizens owning a digital device and 18% owning a smartphone.

The New York Times, The Guardian and Crossword Classic have ventured into the digital world and are arguably the leading crossword in the puzzling world.

Crossword Classic which is a product of Stand Alone Inc. is the highest searched and downloaded crossword app.

While crosswords may be associated with the elderly, lonely or nerd type, solving one is a social activity.

Solvers sometimes reach out to family members and friends to get the context for the clues. People are solving on their laptops, phones, tablets, anywhere and everywhere they can get a fix.

Some are speed lovers who like to time themselves to see how fast they can solve.

Googling a clue is not a good practice as it is considered as cheating because you are competing for a tournament.

It’s your puzzle, solve the way you like it but in a healthy manner. Learn new things from it and have a good time.

Get a wiggle on

If you are a crossword aficionado, you have already experienced the twists and twirls of the wonderful game.

You will agree that the puzzle game intrigues and entices one to dive into the impeccably crafted words world.

The way how hints make way for an intense brainstorming session is simply amazing. However, with the oh-so-busy lifestyle, you don’t have enough time for yourself.

Having technology and the Internet around, anything and everything is possible. Agree? If you still haven’t spilled the beans for yourself, give a major shout out to the coolest and free online puzzles games around.

Settle into a comfortable chair once a week at least, have coffee by your side, and start solving a puzzle.

A game that not only helps you get the best time of your life but also gives freaking awesome prizes to take home.

Pull up your socks, put on your puzzling shoes, sign in at a website and you are all geared up to extract the most impeccably designed crossword puzzles games online.

How to keep your naughty child occupied?

The Past and Future of Crossword Games

How Teachers can Incorporate Crosswords in Classrooms?

5 Reasons You Should Try Crossword Puzzles

How to Cash in on the Penny Crossword...

Protected: how to play crossword games for second...

Games to exercise your mind