The magic of online crossword world magnetizes the players.

Solving crosswords is the best brain activity that not only increased your cognitive ability but also claims to slow down ageing.

The Hardest Crossword was created to be unsolvable in an effort to let the audience understand about Alzheimer. It is a collaboration between Alzheimer’s Foundation of America (AFA) and Area 23, a health care advertising agency that provides its services to AFA.

Charles Fuschillo, the president and CEO of Alzheimer’s Foundation of America said, “The major goal of the crossword puzzle was to let people experience the same inability that is being experienced by an Alzheimer patient and understand the impact of the disease.”

Area 23 enlisted Will Shortz, The New York Times crossword editor and Fred Piscop who is a well-known author. Three different families were interviewed. Based on the information they shared, the puzzle was created, which was finally featured as the Hardest Puzzle.

The puzzle was about a woman called Pat and patients called Marie and Katherine. The puzzle was published in The New York Times, The Wall Street Journal, The Atlantic and other publications making it to almost millions.

According to Fuschillo, The Atlantic offered free ad space for the puzzle while The New York Times, Wall Street Journal, and the New York Daily News published this puzzle in lower prices.

Solve the Puzzle if you can: 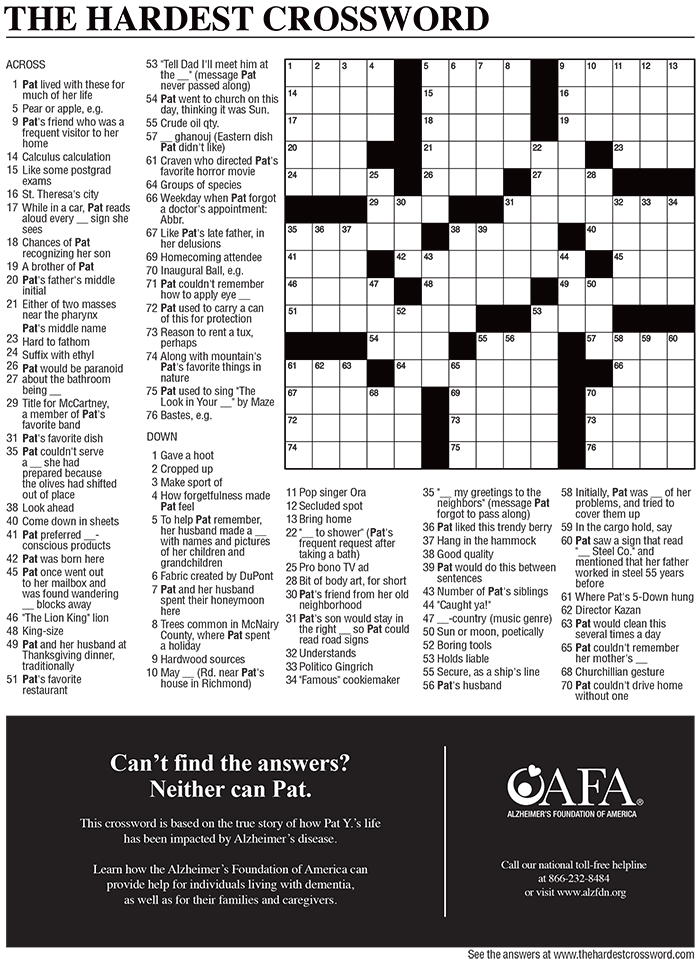 Alzheimer, what is the disease?

Alzeheimer is loss of intellectual functioning in the elderly. The irreversible, progressive brain disorder that declines the memory slowly also reduces the ability to carry the simplest of the tasks.

More than 5.5 million Americans above the age of 65 are suffering from Alzheimer, and the number is expected to amplify thrice by mid-century. This disease is the sixth leading cause of death in the United States. But as per the National Institute of Aging, it is ranked third after heart disease and cancer.

So, if any of your friend or relative is suffering from Alzheimer guide them to indulge in mind activities like solving puzzles, playing crosswords online, solving a sudoku, etc.

Help them get over this disease. Encourage and support them. All they need is your love and support.

Did You Know How Much Good Story Games Can Help You?

Online Crossword Games: Your Way to Financial Security After You Retire

How to Earn Real Money Online with Jumbled...

Understanding the Types Of Gamers & Their Ways...

Simple Hacks That Will Make You Better When...